What happened to Felix the Cat?

In 2007, the city of Los Angeles almost declared the historic Felix Chevrolet neon sign and dealership an official landmark. Then Mayor Villaraigosa's office asked the Cultural Heritage Commission to stop the process, claiming it would be bad for business. Darryl Holter of Felix Chevrolet promised to maintain the sign for future generations. Five years later, Felix Chevrolet partnered with General Motors to rip out the vintage neon tubes and illuminate Felix the Cat with LEDs. If you want Felix Chevrolet to honor its promise to the city and restore this great neon sign, please sign the petition.

From Bad To Worse

Four years on since the landmark Felix the Cat neon sign was destroyed and replicated in LED, and we were shocked to see how bad it looks from the northbound lanes of the 110. The cat, which has long been outlined in white, is now a nasty shade of yellow, with a pair of sinister froggy green eyes floating in the haze. 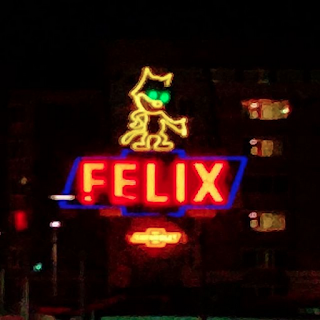 We regret to report that there has been no response to our petition which was submitted on February 11, 2013, asking then-Mayor Antonio Villaraigosa that he work with Felix Chevrolet, General Motors and then-Councilwoman Jan Perry to undo the damage that was done to the historic Felix the Cat neon sign in transforming into a partially burned-out LED sign.

While we are dismayed that the Mayor would ignore the wishes of hundreds of constituents, and go back on his own written promise that this community landmark would be preserved and protected, we do see one positive thing about the loss of this beloved landmark.

Historic preservation happens when official policies are followed. In this case, politicians made special provisions on behalf of a powerful donor, and stopped the Cultural Heritage Commission from proclaiming Felix the Cat to be an official landmark of the City of Los Angeles. The community was asked to trust the politicians and the powerful donor, whose promises were proven to be worthless within five years. Felix was permanently altered, with no public notice and no legal recourse.

Los Angeles, and preservation-minded people everywhere: remember the tail of Felix the Cat, and don't get fooled again.
Posted by Kim at 7:12 PM No comments:


Update 11/8/12: Place a photo of the neon Felix the Cat sign taken by Toby Hancock in August 2012 beside one of the LED sign taken by Chinta Cooper in November 2012, and you'll see how this classic Los Angeles sign has been ruined by the substitution of LEDs in place of neon tubes. Not only are the stripes of LEDs too perfect-looking and the colors and thickness incorrect, but less than two months after the LEDs were installed, individual diodes are already burning out. There is no way to replace individual diodes without replacing the entire row. (11/24/12: image updated to include missing "L") 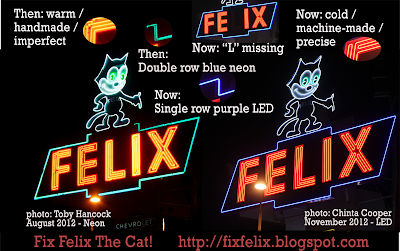 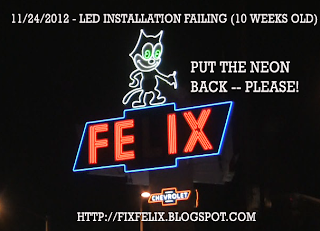 Q: But I thought the Felix the Cat sign was an official city landmark? Isn't it protected?

A: Felix is not an official city landmark. In summer 2007, the Cultural Heritage Commission recommended that the sign and the dealership building be designated as landmarks, but Mayor Villaraigosa opposed the designation -- read his Deputy's letter here -- on the grounds that it might have a negative impact on "Auto Row" business growth.

When Mayor Villaraigosa stopped Felix from being landmarked, Darryl Holter of Felix Chevrolet promised to maintain the sign, or donate it to a museum. Five years later, Felix Chevrolet partnered with General Motors on an energy overhaul of the dealership. The vintage neon tubes were stripped from the Felix the Cat sign, and replaced with LEDs. Because the sign was not an official city landmark, there is nothing that the city could do to stop this. 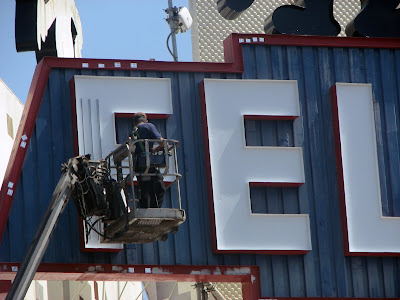 A: Actually, no. In a September 2012 article entitled "Neon: Green Again," in Signs of the Times, the journal of the sign industry, Loren Hudson notes that Underwriters Laboratories recently included neon on its list of Green Energy Certified lighting sources. As for the supposed cost saving of LEDs versus neon light: In 2004, the 40-year-old neon Citgo sign at Fenway Park in Boston received its first LED retrofit. Cost of operation immediately increased from $8,100/year to $282,000/year, and after just five years, the LEDs failed and had to be replaced. Read the article here.

Q: Okay, it sounds like neon is better than LED, and that Felix Chevrolet broke their word to Mayor Villaraigosa and the community that they would maintain or donate the sign. But Felix the Cat has already been altered. What can we do about it now?

A: Please sign the petition asking Felix Chevrolet and General Motors to restore the removed neon tubes and make L.A.'s most beloved neon sign itself again. And subscribe to this blog's occasional email updates (see the "follow by email" link at lower right), so we can keep you informed about this preservation campaign. 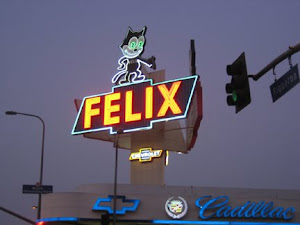